Oct. 14, 2009--On a rainy day in L.A., when everyone is making a ridiculously big deal about it--all the TV news programs are emblazoned with STORM WATCH--as if we haven't seen rain in 100 years or something--as if we were living in the desert!--I thought I'd share a couple of other things that have annoyed me lately.

Last weekend my younger daughter said she wanted a punching bag for either Christmas or Chanuka. ("Oh, you mean to replace your mother?" I said.) I was surprised, since she's not an especially violent kid, but I thought, why not? Get a little exercise. Let out some frustration. Doesn't cost much, doesn't make a mess, doesn't make much noise ... plus, I had one as a kid and was crazy about it.

Ta-da! To my amazement, there, on Amazon.com, was the very same Bozo the Clown inflatable, can't-knock-'im-over, 4-feet-tall sock-me toy I'd had as a tot!

I called her to my computer screen. "How about that one?" I asked.

"Okay," she said, but she sounded unsure.

Well, you know Amazon. Plenty of alternatives are also displayed. So we looked. There was a Scooby one. And one that looked more like something you'd find in a men's gymnasium, if you were in a black-and-white movie from the 1940s or 50s.

Finally I noticed one with another cartoon character on it…and a very funny name scrawled across--wait!

I had to read it twice.

I had to take a closer look. It was horrible! Absolutely disgusting. So offensive it should be illegal. Is it for real? Why isn't anybody staging a boycott? Maybe I should.

Yes, that Obama. As in President of the United States Obama. Kids could have fun socking the duly elected Commander in Chief and Leader of the Free World. For under $25.

I checked the small print. No, it was not brought to you by The Rush Limbaugh and Dick Cheney Toy Company. But how could you explain--how could I explain, to my daughter or to myself--the caricature on the thing.

Sure, Barack Obama is a sports nut. He plays basketball and encourages the White House staff to stay in shape. But there's his image, in cartoon, in boxing gloves and striped boxer shorts, and--I shudder to enter this into my computer--grinning stupidly with an orange-slice mouth of gleaming pearly whites. Yazzuh! 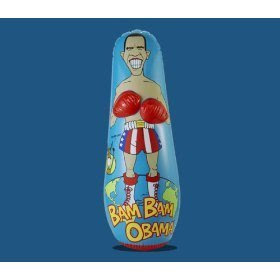 Can you imagine this with any other president? Was there a Bash Bop Bush? A Wollop W.?

Punch it hard, kiddies! Destroy this invidious piece of reactionary propaganda! But realize that what you're socking has a strong resemblance to the vilest stereotypes of a previous, prejudiced era. Because that's exactly what it looks like to me—an old segregationist joke.

Maybe I've lost my sense of humor. The product description explains thus: "Release all your stress from politics as usual! For or against Barack Obama? Either way, relieve some stress...! Yes, we can -- Bop with Bar..."

And get this: It comes with political bumper stickers. Doesn't say for which side.

Made by Rocket USA

Oct. 14, 2009 (Part 2)--Bone of contention No. 2--The other day NPR Morning Edition's Alix Spiegel did a good story about how doctor-patient relationships in this country have changed over the past 10 or 20 years. Because of the Internet, pharmaceutical ads on TV, and, ironically, the rise of HMOs in the 1990s--which led physicians to avoid certain medical tests and procedures so they could clear more profits (since they were paid per patient, not per service)--patients have gotten in the habit of requesting their physicians prescribe new drugs, MRIs, etc. Even demanding them. And doctors say okay whether or not the procedure or medication is indicated, because a) they're afraid of losing business to the doctor down the street, and b) they're afraid that if they missed something, if something goes wrong, they'll be sued.

This isn't so much a problem, except perhaps to the insurance companies, unless we're talking about over-prescribing antibiotics. Which causes them to lose effectiveness and leads to stronger, more dangerous microbes. You still with me?

At any rate, the young-sounding reporter (OK, I looked her up; she's about 37) ended the piece with a terrific albeit ominous quote from one of the physicians--Dr. Joseph Zebley, a family doctor in Baltimore. He said, "We have an infinity of need."

Bingo! That should have been the end of the story. An infinity of need. The need--or people's perceived need--is infinite. Perfect!

But then Spiegel, the reporter, who's won a Peabody Award among other accolades, just had to put her own, unnecessary cap on it. Before closing, she chimed in with, "An infinity of need that grows more infinite all the time."

Isn't the whole point about infinity that it's basically as fully grown as it can be? Infinity cannot grow. If something is infinite, it goes on forever. Yes?

Sure, we all say stupid things sometimes. But this was in an edited piece. It wasn't a news item hot off the microphone. It was obviously prepared well in advance. Why didn't someone cut or correct this?

I may have a grudge against NPR, because it's basically stopped using my commentaries, but I began to wonder if it's quality is slipping. Wouldn't be surprising, given its budget cuts over the past few years.

In fact, my most recent commentary submission was accepted but I'm waiting to hear back from my editor about necessary changes. When I asked her what's taking so long, she apologized and conceded that much of the staff was on furlough so those remaining were having to double up on the workload.

Aha! Perhaps my suspicions are correct. The program is not being as thoroughly edited as it used to be! Or, to save money, is it using younger correspondents than it used to? I mean, it's great to give up-and-comers a shot, but I still prefer the old pros, the seasoned experts who made NPR news the great thing it is. Or was.

I hope I haven't just blown my chances there...

A transcript of the story is here:
www.npr.org/templates/transcript/transcript.php?storyId=113664923

You can hear the NPR broadcast here:
www.npr.org/templates/story/story.php?storyId=113664923 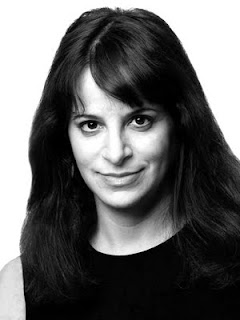