Keep your Fountain of Youth!

I have few hobbies.  I don't play tennis, golf, or Xbox.  I watch the occasional NBA game or police procedural.  On weekends, my wife and I like to do the tough crossword puzzles together, a cooperative team effort.  And I read, of course, but for me that's almost as much a professional endeavor as a pleasant pastime.
None of these activities are done on anything resembling a regular, devoted basis, as a true hobby would be.
Yet I do indulge in a guilty pleasure I just can't seem to stop: I like to watch old movies (and some old TV shows).
Hard to say why exactly.  It used to be—in the years after I graduated from college—that I considered myself almost an unofficial student of cinematic history.  I rented every intriguing old movie I could find at specialty video stores.  I went gaga for Fritz Lang and Ernst Lubitsch, "discovered" forgotten stars such as Warren William or Pola Negri.  I took in everything from the obscure European silent to the popular romantic comedies of the so-called Golden Age.  I was determined to memorize each one so I'd never accidentally watch the same film twice.
You like the Tracy-Hepburn matchups?  Ah, but have you ever seen "Keeper of the Flame"?  You think "It's A Wonderful Life" is a great holiday flick?  Have you ever seen "The Shop Around The Corner"?
Aside from the escapist pleasures of the moving-images themselves, I was equally fascinated by the cultural and historical implications.  Were women portrayed more fairly in the early years of Hollywood (Marion Davies, Constance Bennett, etc.) than in, say, the reactionary 1950s?  Why was Sidney Poitier so important to the Civil Rights Movement?
And perhaps most relevant to me, why were there so many villains with disfigurements and/or outright disabilities?  (Can you hear me, Lon Chaney?)
Last week, for no particular reason, I started to re-watch "Monkey Business."  Not the Marx Brothers vehicle from the 1930s but the 1952 film of the same name, perhaps best known nowadays as an early vehicle from Marilyn Monroe.  (Make your own "chassis" joke.)  She's quite funny as the archetypal Dumb Blonde Secretary, but that's not why I started watching it.  Honestly.  I was randomly searching for Cary Grant titles.
Anyway, Grant is the real star of the movie, along with Ginger Rogers.  In many ways it's a sort of remake of his "Bringing Up Baby"--he's an absent-minded scientist who has hijinks involving obstreperous animals.  To my surprise, I was hooked and had to watch it all the way through.
Now, maybe it's a sign of encroaching Alzheimer's, but I really didn't remember any of the details of this movie though I'm sure I must've seen it before.  (Mustn't I?)  If anything, I vaguely recall once upon a time thinking it was too silly to bear.
Yes, it IS silly.  It's slapstick comedy.  But here's the thing: I think it has a terrific message for people with disabilities.  Especially people aging with disabilities.
Not to give too much away, but there's an accidental discovery of an anti-aging formula, a lab-created Fountain of Youth.  Which creates situations aplenty for the actors to behave like, well, wild intoxicated idiots.
In the end, of course, they realize that shedding the strictures of age ain't so great.  Simple message—youth and its concomitant healthiness aren't all they're cracked up to be.  He'd rather need eyeglasses and suffer through his bursitis or whatever—and she'd rather be stodgily middle-aged (at all of 41!)—than be the outrageous, insecure, jealous, wasteful and antisocial hellions they were as healthy, energetic kids.
It's sweet.  To me, however, there's a profound disability message in this.  Sure, depending on assistive devices such as wheelchairs can be a big inconvenience.  But you can live happily with such limitations and dependencies.  To an extent, you're only as old or as decrepit as you feel yourself to be.
I guess you can find profound messages or, for that matter, offensive stereotypes in all kinds of places.  All I know is, this stupid old movie kept me grinning for days! 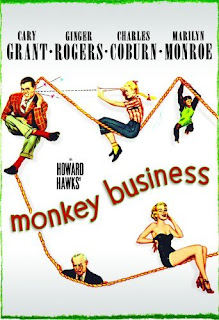